ODB’s Meat and Greet Food Truck launched at Bike Week in 2017, and the truck has been a main-event-level draw at every event it has rolled into since. ODB got back in the ring with Impact Wrestling, appearing on television, as well as appearing for the National Wrestling Alliance for the last four months while waiting for her new food truck.

Recently, the local community has also come together to support Kresa, including Hayes’ Public House in Buffalo, Minnesota, who recently brewed the ODB Bam Orange Dreamsicle Pale Ale beer to help with the fundraising efforts.

ODB’s Meat and Greet Food Truck has appeared on CityPages, Sirius XM’s Busted Open, Miami Herald, Newsday and many more. ODB is excited to be launching her new food truck in Maple Grove.

“I’m grateful for the support of Maple Tavern and the Maple Grove community. I’m looking forward to the grand opening and starting the new chapter of ODB’s Meat and Greet Food Truck,” Kresa said. “I believe everything happens for a reason, and now I’m coming back bigger than ever!”

In addition to great eats such as the popular PORK MANIA, BAMWICH and Meat In A Cup, ODB’s award-winning sauces including her ODB Whiskey Hot Sauce & ODB Whiskey BBQ Sauce will be available for sale.

ODB has been widely covered throughout the nation including features on Joey Fatone’s My Family Recipe Rocks, Sirius XM’s Busted Open, Miami Herald, Newsday, FOX 9 News, and many more.

ODB is followed by over 244,500+ followers throughout her social media accounts. 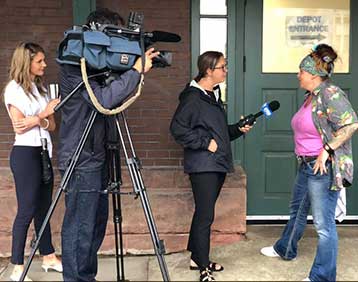